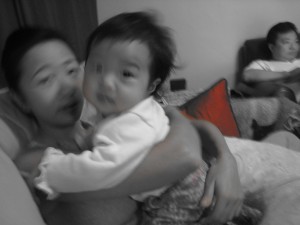 So I gave my 4 year old son an old digital camera. Since he watches me take pictures of the family on a regular basis, he has wanted to take pictures for awhile now. And now that he has one in hand, he takes pictures incessantly. It is definitely from his 4 year old, half my height point of view, like the picture on the left (I am still trying to figure out how he did that). What he sees and what is important to him is very different from my perceptions of the world. In viewing his pictures, I see life and the world a little differently.

During lent, our small group called The Journey has been studying the book of Acts. One common theme that emerged in the last two weeks is the idea that in conversion experiences, God helps us to view the world with new eyes. In the last two weeks, we have been studying the conversion of Paul and the acceptance of gentiles by Peter. For Paul, he was literally blinded by the light and when he could finally open his eyes after three days, he begins to experience and view the world in new ways. And for Peter, it was the vision in a trance and his up and close encounter with gentiles that opens up new worlds to him. Lately, I began thinking of seminal God-moments in my life that have made me see the world in a different way.

One such moment occurred as I was graduating from college. I helped take a group of high school seniors to New York City to do a week of mission work. I remember one of our projects was to take hot, nutritious meal to those who were suffering from AIDS. I grew up in a small town and in a somewhat conservative church. I had ambivalent feelings about homosexuality and had never met anyone suffering from AIDS. As I walked up several flights of stairs to the apartment of my destination, I felt a tinge of nervousness. What do I say? What do I do? Do I and/or can I touch him? It was at a time when information about AIDS was just beginning to surface. I knocked on his door and waited with abated breath.

He opened the door with a smile, shook my hand and asked me to come in. I entered and quickly scanned his small one bedroom apartment in the middle of Manhattan. I felt as if I was walking into Bronners in Frankenmuth, Michigan, a place that celebrates Christmas 365 days a year. His place was littered with Christmas ornaments, mistletoes, blinking lights, creches and tinsel. As I served him his meal, he asked me about my life and my experiences thus far in New York City. After telling him about my boring small town life, I asked him about his. I knew it then, but now looking back, it was truly a holy moment as he opened up and told me some of the deepest parts of his life. He told me about the rejection by his family when he told them that he was gay. He told me about the rejection by his pastor and his church and now he was completely ostracized since they found out he has AIDS. He told me about the deaths of his closest friends. And he told me about his life as one of the Santas at Macy’s during Christmas time. He told me that being Santa at Christmas was the happiest time for him, though he had to stop a year ago because of his deteriorating health. He stated that in his Santa suit he can be completely who he is and is totally accepted for what he is. As I listened to his story, I felt as if God had put God’s hands in my gut to violently stir it around letting me feel all of the emotions and the passion of the moment. I felt tears for this man, but more importantly, I felt deep anger and deep compassion for him. It was a holy moment as he felt safe and trusting enough of a 22 or 23 old to tell of the most painful parts of his life. Through his story, God was telling me that ambivalence is no longer viable for me. Ambivalence leads to apathy and that is no way to follow in the ways of Christ. I was to follow Christ with passion and compassion. On that day, God showed me through my gut what compassion, agape love and true koinonia with a fellow human being meant. Because of this experience, I was forever changed. From that moment, I did see the world with new eyes.

Tomorrow morning, the California Supreme Court will be hearing arguments for and against overturning Prop 8 Ban that passed a few months ago. My only hope is that the judgement be made with justice and compassion in their hearts. That is my prayer.

4 thoughts on “Seeing with New Eyes”